The adventures of Alexander Girardi 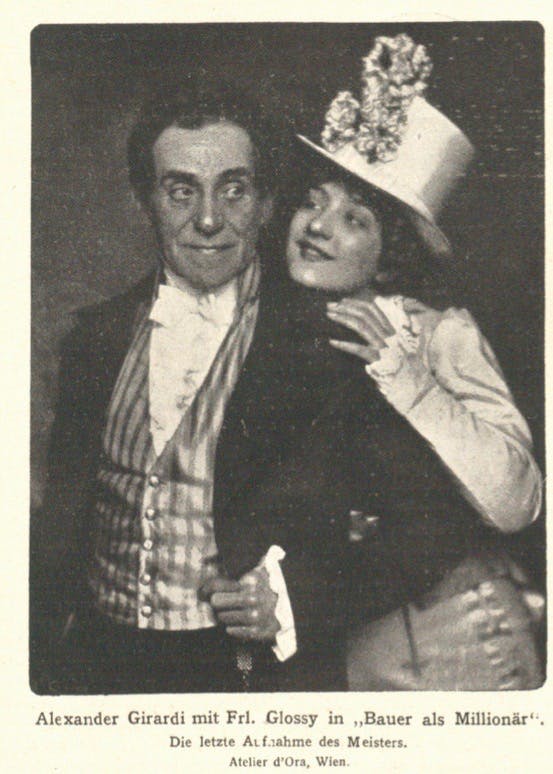 Some days ago, we told you the story of Katharina Schratt and her relationship with the emperor Franz Joseph. There is an interesting story told by Hellmut Andics that involves them both and also the famous actor Alexander Girardi. Girardi was born in Graz in 1850 and performed in Vienna for the first time in 1871. In 1893, Girardi married the actress Helene Odilon and, unfortunately for both of them, their marriage was a disaster. The situation between these two got so bad that Helen managed to have Girardi declared medically “insane and dangerous”. And the reason for this? According to Andics, one day Girardi caught Helene coming back from a date with Albert Rothschild and full of rage he held a gun to her face. After all this, the police started looking for Girardi, but he had disappeared. Where did he go? A friend of his took him to the Gloriettegasse where Katharina Schratt lived. So, on December 9, 1896 when the Kaiser Franz Joseph shows up at Katharina’s home at 7 a.m. for breakfast like every morning he finds there the fugitive Girardi. One can imagine the sort of news this encounter could have led to! Eventually, the Kaiser helped Girardi and the statement about his mental incapacity was annulled. And this with a good reason: the doctor who declared Girardi “insane and dangerous” had not even met the patient. We don’t know if this encounter at the Gloriettegasse actually happened or if it is pure fiction. But it makes for a good story! (Cr)