The Wiener Schnitzel, by way of Constantinople, Paris, and Milan 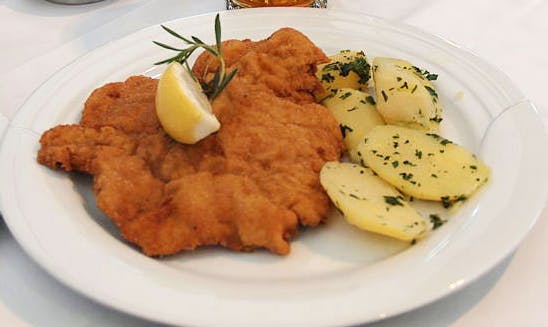 Where does the Wiener Schnitzel come from? The name of course ties it to Vienna, but many contend that it actually comes from Milan. Breaded, deep-fried veal might not seem like a highly original concept, but the origins of the schnitzel can send passions soaring, and historians scrambling. So where does the thing actually come from? In fact, we don’t really know. One of the first historical mentions of something similar to a schnitzel actually comes from Constantinople in the 12th century. In this pre-modern time, breading was not uncommon – it was a resourceful way of using up old bread that had otherwise gone stale, but could become delicious through a bit of frying.

The term Wiener Schnitzel does not show up in the historical records or in cookbooks until the 20th century – prior to this it was just known as a veal schnitzel or a breaded schnitzel. How it exactly came to be associated with Vienna is unknown, though it may have been through the free-wheeling inventiveness of a Parisian cook in the 19th century who, perhaps with an eye to enticing customers with cosmopolitan fair, created ‘paner à la viennoise‘ (breading Vienna style). But then how does Milan fit into the picture? Well that comes from a legend about field marshal Joseph Radezky who supposedly brought the recipe back from a military excursion in Italy, and presented it to the Kaiser in Vienna. The story goes that the recipe found great enthusiasm from the Kaiser and the people of the court, and from there spread across the Empire. And although this story is almost certainly not true, that is how an Ottoman cum Parisian invention named after Vienna came to be associated with Milan!