St. Stephen and his horses 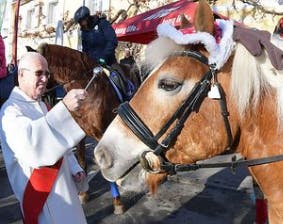 The 26th of December is known as Stefanitag (St. Stephen’s Day) in Austria, and is a national holiday. This is the same St. Stephen after whom the Stephansdom is named, but who is he and why is he so celebrated in Vienna? He was, in fact, the first martyr of the Christian faith, and is thought to have died for his beliefs somewhere around 40 AD. As one of the world’s first deacons, the 26th of December is now also celebrated as a festival for deacons, in which the Cardinal invites 200 deacons to a special mass.

Horses are also closely associated with Stefanitag, because St. Stephen is the patron saint of horses and riders. This has evolved into a tradition in which horses are brought out to trot and gallop through town or around churches, before being blessed by a priest and fed holy bread and salt. The fact that this takes place in winter also served a practical purpose  as it became clear that having horses stay in their stalls all winter was detrimental to their health – in fact, this is the real origin of the “Stefaniritte” (St. Stephen’s rides), but the additional blessing is meant to guarantee a safe and accident-free year to come for horse and rider alike!