The story of May 1st 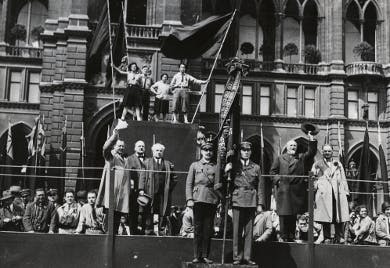 The story of the celebrations for May 1st dates back to the 19th century and starts in the United States. The conditions for factory workers, who had to work at least 10 hours a day, were very stressful and dangerous to their health. Eventually, on May 1st, 1886 workers started to fight for improvement in their working conditions and their rights. Over 340,000 workers went on a strike in Chicago and this started a worldwide movement with workers elsewhere also demanding better working conditions, fewer hours, and higher wages. After two days of strikes, the situation between workers and the police escalated and this entered the history books as the so-called “Haymarket Riot”. The strikes eventually came to Europe and also to Vienna in 1890. After these events, it was decided to celebrate the 1st of May every year as a “day for the workers of all countries, where the workers should express the unity of their demands and their solidarity”. In 1919, the day was declared a national holiday in Austria, but only until 1933 when the Social Democrats were banned by the government of the Austrofacist Engelbert Dollfuss.  In later years, the 1st of May was celebrated as the “day of the German work”.  After the Second World War, the celebrations on May 1st gradually took on the character familiar that it has today. Perhaps one of its highlights are the celebrations of the Social Democrats in front of the city hall, which now is decorated with a huge art installation. Not everyone is there for sure, but we all enjoy the holiday! (JE)