A crash, a boom, and a missing bridge 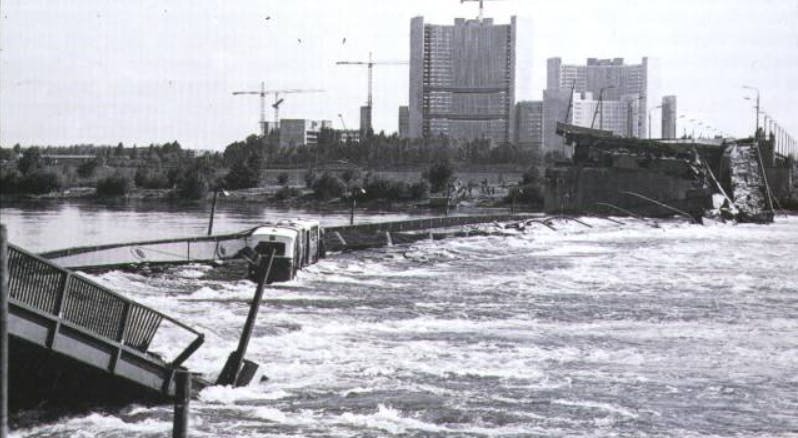 As spring arrives, people start heading out towards the Danube and other leisure areas in the city, often traveling by car across one of the many bridges spanning the land masses between the various arms of the mighty Danube. Although this shouldn’t be any cause for concern these days, some 43 years ago there was what you might call a bit of an incident. It was the wee hours of August 1, 1976 when a booming crash awoke residents near the river, and the earthquake tracking station at Hohe Warte registered some activity. But it wasn’t an earthquake. No, when people looked out their windows to locate the source of the racket, they discovered that one of the main transport arteries to the city was simply gone. The Reichsbrücke, one of Vienna’s most trafficked bridges, had collapsed into a heap of concrete and dust into the Danube river bed bellow.

At the time of the collapse, only 5 vehicles were on the bridge; as such, the early morning hour was surely a significant factor in minimizing the loss of life. Nonetheless, it was still a tragic accident in which a 22-year-old driver was killed. Initially there were also concerns about gas explosions as a result of damaged gas pipelines, such that the entire area was under strict supervision and the rest of the city on high alert. Ultimately, a 400 page report detailing the crash determined the cause to have been water that somehow got into one of the cement pillars, causing a tear that ultimately cost the bridge its structural integrity. The inspections at the time could not have caught this, as it was not visible under the granite coating. This led to all bridges in the city undergoing a rigorous inspection, and a change to guidelines following this event. Although almost half a century has passed, mentions of the Reichsbrücke still often conjure up memories of this event – and for those who want a closer experience, the Vienna city bus that was only on the bridge because the driver took a shortcut but survived the plunge relatively unscathed, can now be seen displayed in the Vienna Tram Museum. (C.G.)