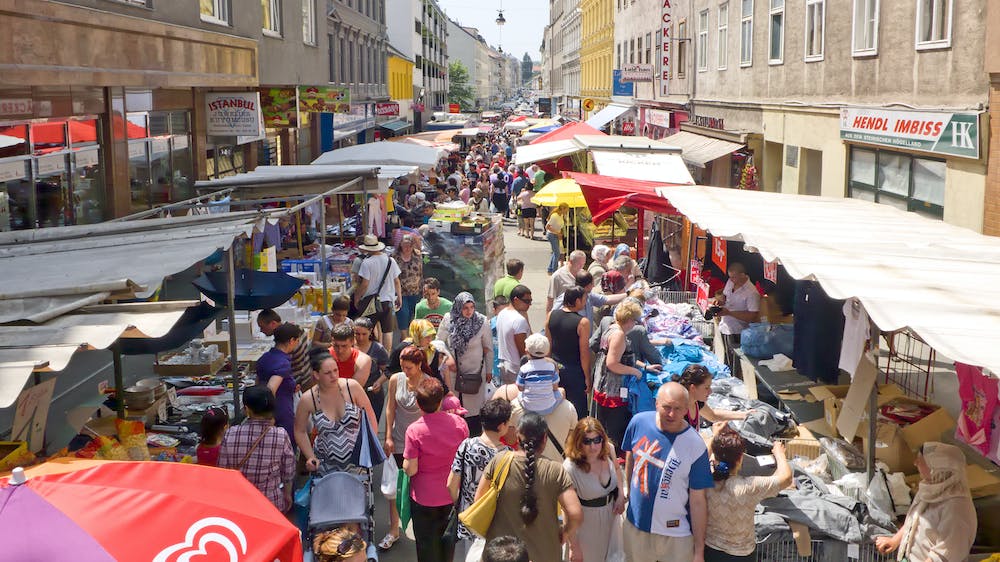 In the 16th district of Vienna – between Thaliastraße and Ottakringerstraße – you will find the longest street market in Vienna, which is at the same time one of the last pure street markets in town: the Brunnnenmarkt.

Originated in 1786 in the former Viennese suburb of Neulerchenfeld, the street received the official name “Brunnengasse” in 1873. The roots of the market go back to 1830, when the market consisted exclusively of wooden structures or ancient Leiterwagerln to be completely dismantled after market closing in the evening. This was the tradition until 2005 and since then the Brunnengasse is closed to cars and the stands remain overnight. In 1973, the market grew together with the Yppenplatz with its firmly built business stalls, and dozens of great cafés like the Frida, which are great places to take a break and enjoy one or five Spritzer and watch people rushing around.

The market itself exudes southern flair, especially in summer. The international scene that settled down around the area made the Brunnenmarkt and the adjacent Yppenplatz one of the liveliest and most colourful areas of the city. It is also probably the cheapest market in Vienna, with little money you receive full holiday feeling and you can shop like in an oriental bazaar: People screaming and offers are loudly praised, especially on Saturday, when the farmers from around the city gather at Yppenplatz and offer their organic products like honey, jams or wine. The market itself has everything your heart and household desires: exotic fruits, crunchy vegetables, fresh fish and meat, olives, rice, exotic spices, flowers or textiles. On both sides of the market, there are numerous shops, restaurants, Beisln, cafés or bakeries, next to jewellery and ceramic traders, so sudden hunger feelings can be quickly cured. The Bunnenmarkt is the perfect example of an international neighbourhood, which you should really not miss out while staying in Vienna! (JE)