The Life and Times of Luzi-Wuzi 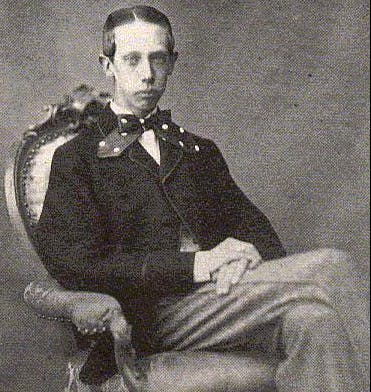 There are many scandals, secrets, and stories about the Habsburgs – some hearsay, some confirmed. One member of the Habsburg family about whom much was speculated but not so much was known is Archduke Ludwig Viktor, youngest brother of Kaiser Franz Josef. Known to his family and friends as Luzi-Wuzi, he was known for his sharp intellect and biting tongue. His other brother Maximilian, who was the Emperor of Mexico at the time, had tried to arrange Ludwig Viktor to be his successor through a marriage to the daughter of Pedro II of Brazil. Ludwig Viktor has no interest in this however, and turned it down, thus dashing the hopes of some that Brazil and Mexico would be united through a royal marriage. Instead, Ludwig Viktor focused on collecting art and building palaces – among them the Palais Erherzog Ludwig Viktor, built between 1863-1866 to become the very first palace built on the Schwarzenbergplatz. Ludwig Viktor was known for throwing lavish parties in his palaces, though it was apparently an open secret that he preferred the company of men to women. However, he was not able to make use of his palace on the Schwarzenbergplatz for long as he was soon banished to Salzburg as a result of an embarrassing scandal for the imperial court; reportedly, Luzi-Wuzi had been involved in a fight amongst men in the famous male saunas of the Vienna Central Bath (known today as the Kaiserbründl). He would remain in Salzburg for the rest of his life, dying there in 1919 as the respectable old age of 76.

For more info about the Central Baths, read our story: https://secretvienna.org/where-the-elites-bathed-viennas-c…/