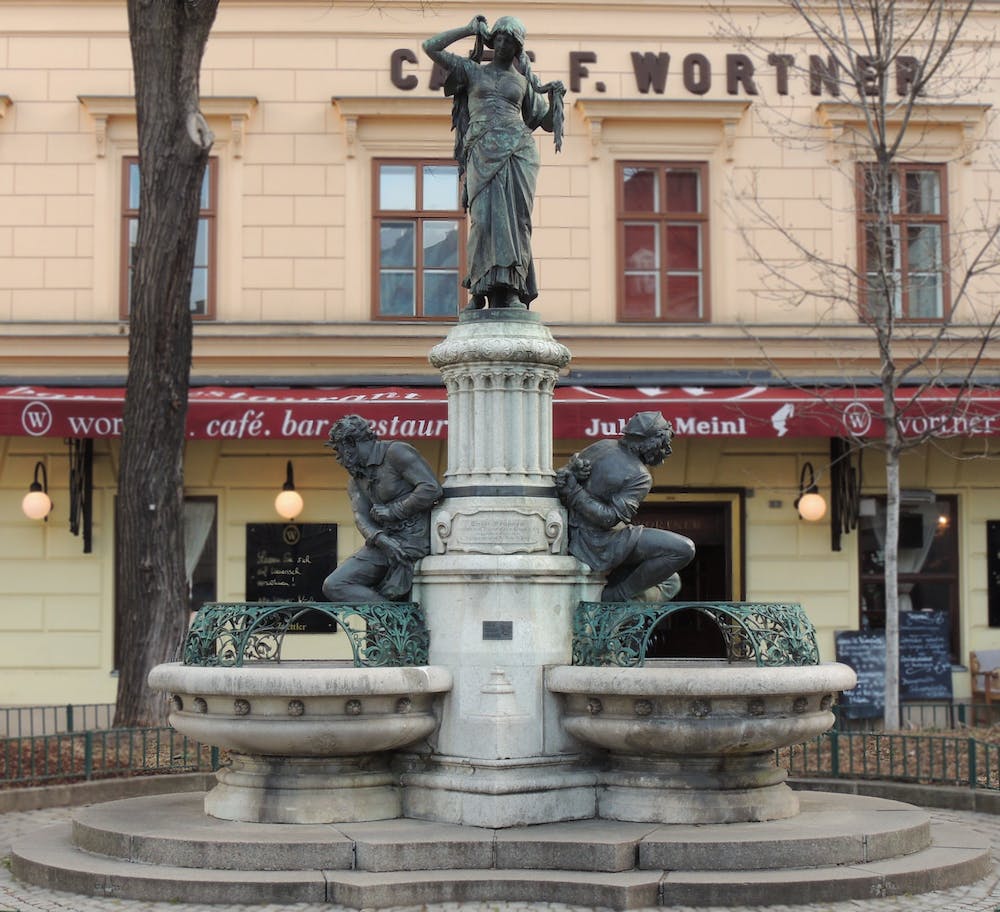 Not long ago we showed you the Schutzengelbrunnen (Guardian Angel Fountain) in the fourth district of Vienna. Not far from it is a second fountain with a very similar name, Engelbrunnen (Engel meaning Angel in German).

It consists of two round basins between which a compact columnar pedestal emerges. On it stands the figure of a young woman, dressing her hair and at her feet two bound male figures serve as spouts. The odd thing is, that there are no angels to be found. So how does the Engelbrunnen get its name? Well (pun intended), let us tell you. In 1871 a former employee of the Ministry of War in Vienna died. In his last will and testament he decreed that a fountain should be erected in his memory. His name was, you guessed it, Viktor Edler von Engel, hence Engelbrunnen.

Engel’s testament also determined which figures should adorn the fountain. He chose the main protagonists of an old Viennese legend which goes like this: Not far outside Vienna, at the so-called devil’s mill, the dangerous robber Aufschring had set up his camp. Only one person in town knew that he had been hiding there, and that was Dörlinger, a corrupt innkeeper and Aufschring’s partner in crime. The authorities searched in vain until one evening a young woman named Elisabeth knocked on the door of Dörlinger’s inn. She was a trader on her way to the Viennese market looking for a room for the night. Robber accomplice Dörlinger immediately realized his luck and offered her his most beautiful room. Elisabeth moved in with all of her goods, while the innkeeper notified his accomplice. Aufschring, spurred by the prospect of rich prey stormed in to Elisabeth’s room, where she was busy loosening her long beautiful hair. As if she had expected it, the young woman apologized calmly for being busy and asked the intruder to take a seat on a chair she had brought with her. Aufschring, pleased by the sight of Elisabeth, followed her invitation. At that moment a secret mechanism was activated, tying Aufschring to the chair–, Elisabeth’s trap had snapped shut. Now it was an easy task to arrest the culprit and even his accomplice was quickly caught. The clever young woman had achieved what no one else had managed. Thus, the Engelbrunnen is not only a monument to its namesake, but above all to one of Vienna’s bravest women! (CH)