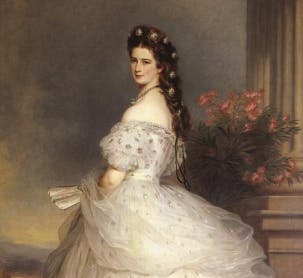 Empress Elisabeth from Austria, nicknamed Sisi and actually from Bavaria, was known for her impossibly thin waist, and incredibly long hair. One of the most famous depictions of her is a portrait by Franz Xaver Winterhalter, in which she glances over her bare left shoulder with her hair spilling down her back and decorated with a handful of diamond and pearl stars. These have come to be known as “Sisi Sterne”, of which a set of 27 were made for the Empress by the Jewelers Köchert and Piote.

Over the years, these stars have attracted attention – not least when one of them was stolen under mysterious circumstances from an exhibition at Schönbrunn, a theft which was almost immediately covered up by the Viennese police and press. In fact, before almost anyone even knew the star was missing, the newspapers were proclaiming it had been returned –falsely, it turned out, apparently in the hope of give the thief a false sense of confidence to sell the jewelry to a local antiques dealer. When this didn’t happen, the story faded from view; anyway, as far as the public was concerned, the piece had been recovered so there was no reason for concern.

It would take 10 years for the full story to come out, which raises as many questions as it answers: in 2007, Gerald Daniel Blanchard was arrested and charged with a string of robberies in Canada. During the investigation, Blanchard claimed to be in possession of an old piece of jewelry from the Empress of a far-off European country, which prompted a search of his properties, and sure enough: in his grandmother’s basement, authorities found the Sisi star. It turns out he had been in Vienna in the summer of 1998, and had visited Schönbrunn, where he first set his sights on the star. Supposedly, he was able to loosen the screws of the display case and leave the window ever so slightly ajar while alone in the room. Later that night, he somehow organized a helicopter flight over the palace, parachuted out, climbed into the open window, removed the star, replaced it with a cheap replica, and returned to Canada without anyone being the wiser. And as a result of the strange media strategy of claiming the jewelry had been recovered, Schönbrunn was forced to continue displaying the fake Sisi star for the duration of the exhibit. It was only in 2008, after Blanchard’s arrest for various other robberies and thefts, that the real star was finally returned to its rightful place! (C.G)