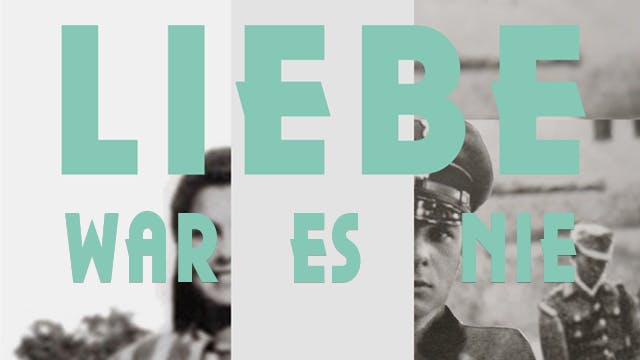 “Love, it was not”, a new film directed by Maya Sarfaty, caught me by surprise. As a jew and Israeli, i’ve watched and heard countless heart-wrenching movies and stories about the holocaust. This film, however, tells such an unbelievably complex yet human story that anyone can connect to.

In a private screening at Haydn Kino, at 9:30 in the morning, i was introduced to Helena Citron. A young, beautiful jewish woman and an Auschwitz prisoner. Her talent was singing and one song in particular caught the attention and later the heart of one SS officer, Franz Wunsch. Ironically, the song was “Liebe war es nie” or Love, it was not, which can very well define the impossible love story of the two.

Throughout the movie, Helena has to face countless dilemmas and conflicts. She uses her connection to Franz, her lover/captor to save others from daily beatings or execution. Yet she also has to face the brutal criticism of her own fellow prisoners who cannot accept the inconceivable relationship. In a place where death awaits in every corner and survival is the only goal, the pressure on Helena is unbelievable. It even intensifies when her older sister arrives to Auschwitz with her own family. Throughout the film, Helena makes impossible decisions, some that save lives, others that haunt her forever.

Even after managing to survive the horrific death camp, Helena must face a difficult dilemma. She is summoned to testify at Franz’s trial in Vienna and must again choose sides- help the man who once helped and loved her or punish him for his brutal and inhumane acts towards her jewish brothers and sisters.

Through interviews, animation and excellent story telling, the movie manages to reach deep inside and touch the viewer’s heart. It forces you to question yourself and wonder- what would you have done?

Movies about the holocaust are often difficult to watch. The stories told by the survivors show a different side of man kind- a monstrous side which resides even in those some might consider as “enlightened”. Yet what some movies often do not show is the humanity of those involved.

To me, this is the most powerful aspect of this story- they were all human. In order to execute this mass extermination and carry out their horrific crimes, the nazis had to eliminate the humanity of the jews and to forget their own. This story takes that away from them and shows the brutal truth- both sides were human, capable of love on the one hand and of vicious cruelty on the other. This is a lesson which must never be forgotten.