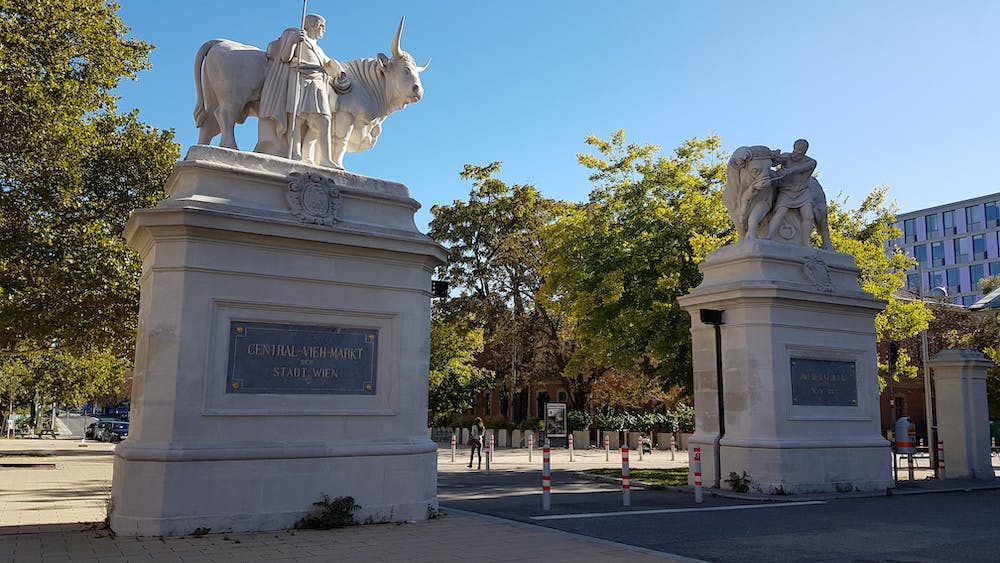 Historically there were many different markets in Vienna, and many of today’s street names reflect this: Kohlmarkt, Heumarkt, Hoher Markt, and Bauernmarkt to name a few. Aside from the names that harken back to these earlier times, however, there is little other evidence that would clue you in to the fact that these areas used to house different market places. One market in Vienna that retains a bit more of its historical character is the Viehmarkt (livestock market) in the 3rd district.

The most obvious sign that this used to be a livestock market are the imposing bull statues that guard the entrance to what is now the Marx Halle, but was previously Vienna’s Zentralviehmarkt – or the central livestock market. However, it only became the Zentralviehmarkt (or Central-Vieh-Markt as it was previously spelled, which can still be seen on the statue pedestals) in the early 1880s. Prior to this, it was already a livestock market and slaughter station, but was in effect nothing more than an open field where the livestock was kept to be sold and slaughtered. It was only in the 1880s that it was built up with buildings that held cows, calves, sheep, and pigs. What we know today as the Marx Halle was originally the Rinderhalle (cow hall), and could hold up to 6000 cows at a time. Separate halls could hold up to 4500 calves, 6000 sheep, and 11000 pigs. This made it by far the largest livestock market in Vienna and its surroundings. Most of the animals sold in Vienna came from Hungary, and were actually herded through the city to the markets before railway connections were built! (C.G)