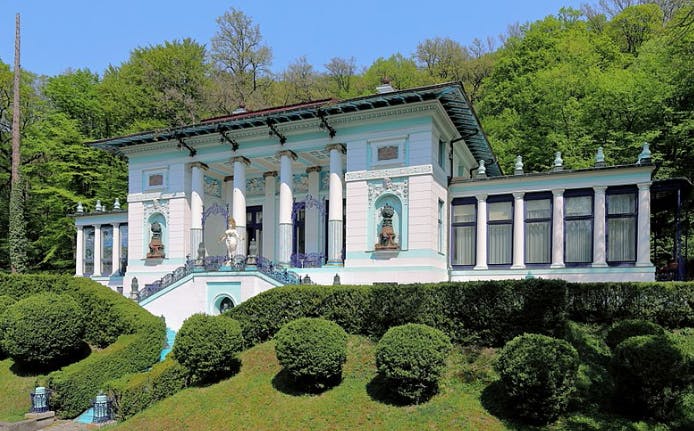 Driving into or out of Vienna in the direction of Hütteldorf, you may come across an impressive aquamarine-accented villa standing in relative isolation at the edges of the Vienna forest. This is the Villa Wagner I, also known as the Fuchs-Villa for the artist Ernst Fuchs. It was built after designs by Otto Wager from 1886-1888 as a family home for the Wagner family, who lived there full-time from 1895 until 1911, when it was sold to the director of the Apollo theater, who lived in it until 1925. Like so many buildings in Vienna, it did not go unnoticed during WWII and was seized by the Nazis for their own use, becoming an office for the Hitler youth. The injustice continued after the war, as the Villa was not returned to its previous owners, but rather became an object of speculation and was even threatened with demolition in the 1960s.

The Villa was saved and revived in the 1970s, after Ernst Fuchs purchased it for a price of 14 million Schillings (around 1 million Euros without accounting for inflation) in 1972. It became his Atelier, and some famous personalities crossed its thresholds during this time, including Falco who sat for a painting. Since 1988 the villa has housed the Ernst-Fuchs-Museum and is open to the public daily from 10am-4pm, except on Mondays. So the next time you drive by, instead of wondering what the place is, drop by and have a look for yourself! (C.G.)