The Skandalkonzert of 1913, or the most Viennese fight of all time 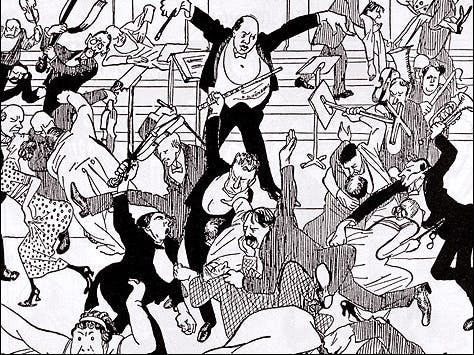 Like all places, Austria has seen its fair share of scandals – but some of them are quintessentially Viennese. This includes a particular scandal in the early 20th century, which has gone down in history as the Skandalkonzert of 1913, and truly could have only happened in Vienna. The concert in question took place at the Musikverein on March 31st, 1913 under the direction of the famed Viennese conductor Arnold Schönberg. The music that was played was expressionist and modern, an extreme departure from the conservative traditions of the classical music scene in Vienna. The audience was divided in its response to the music, with a significant proportion of them shocked and outraged at the experimentalism of the music. The reaction was so visceral that rioting and fighting broke out, causing the concert to be cut short. Furniture was broken and punches were thrown, with supporters of Schönberg facing off against those who considered the concert an affront to decency and an insult to the legacy of classical music in Vienna. Caught up in the hullabaloo was Erhard Buschbeck, the concert organizer, who most likely administered the most famous punch of the entire scuffle. This was not because of the punch itself but rather due to a comment made by composer Oscar Straus, who had attended the concert and later declared that Buschbeck’s punch had been the most harmonious sound of the entire evening! (C.G.)