The Sensuous Stylings of Man Ray 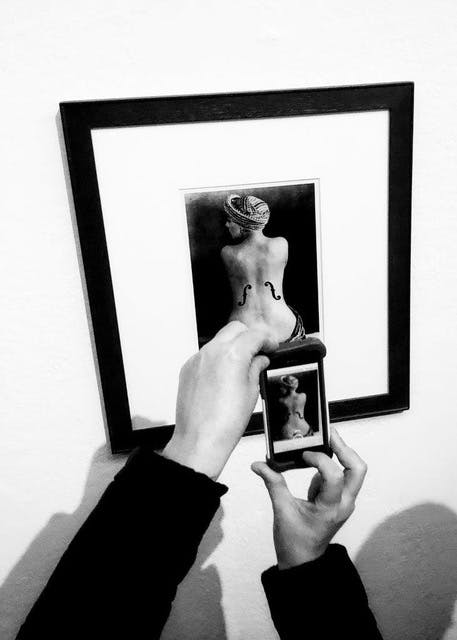 ‘There was sperm in the air’ – Stefan Zweig said of fin-de-siècle Vienna in an attempt to describe the environment which had given birth to so many ideas and art works. If a certain air quality is required to sparkle creative revolutions, then 1920’s – 1940’s Paris must have had it in illegal concentrations. Hemingway, Picasso, Joyce, Brancusi are just a few of those who came to the city from far away to be inspired and father their creations.

Man Ray went to Paris too. Born in 1890 as Emmanuel Radnitzky, he worked as a painter and photographer in New York and in July, 1921 he sailed to Paris to set-up shop in Montparnasse. For the next 20 years he painted, directed avant-garde short films but mainly he made portraits of artists, writers, models, actors; many of whom he befriended, some of whom he fell in love with.

The Man Ray exhibition in Bank Austria’s Kunstforum (running until 14th of June) offers a rare encounter with his fabulous world, displaying a selection of 150 works from all over the world, including painting, photography, objects, works on paper, collages and assemblages and experimental film.

Portrait photography, especially of famous people, has the natural tendency to shift the viewers’ attention from the artist to his subjects. Looking at a portrait of Picasso taken by Man Ray do you ‘see Picasso’ or you ‘see a Man Ray’? One never has this dilemma with a portrait painted by Picasso. Strolling through the exhibition, the question ‘who was Man Ray’ dissolves into ‘who was Kiki?’, ‘who was Lee Miller?’

At the beginning there was Kiki. A poor girl in search of artistic fame in the smoke-thick, alcohol-infused, idealistic air of 1929s Montparnasse cafés, she became his first muse and lover. During the six years they were together Man Ray took hundreds of photos of her, including his probably most famous one: the naked back of Kiki intimating the shape of a violin, aided by the drawing of two mirroring f letters. Kiki as an ‘instrument for the creation of art’. His and others’.

Then came July, 1929. On a glorious, warm evening a young girl glowing with ethereal blonde beauty and elegant New York accent approached Man Ray in a bar: ‘My name is Lee Miller, and I’m your new student’ she said, ‘I don’t have students.’ he replied. And anyway, he was departing for Biarritz, a seaside resort in Southern France, the next day. What a coincidence, she said, so was she.

This beautiful coincidence had been carefully orchestrated by Lee Miller. What do you do if you are a successful 22 year-old fashion model in New York with creative aspirations? You board a ship for Paris (and its intoxicating air) and you bring your wits and beauty to the famous photographer. The story of the three years they spent together is God’s gift to an art biographer. They made art, love and friends to the brink of madness. He gave her a Kodak camera and taught her photography.

The Man Ray exhibition in the Bank Austria’s Kunstforum is dense with art, stories and the electric charge of the artists who inhabited those times and places. The in-breeding of ideas (and not only) is present in each room of the Kunstforum. Hopefully, something of the air quality has been preserved and can still inspire. (Radu)