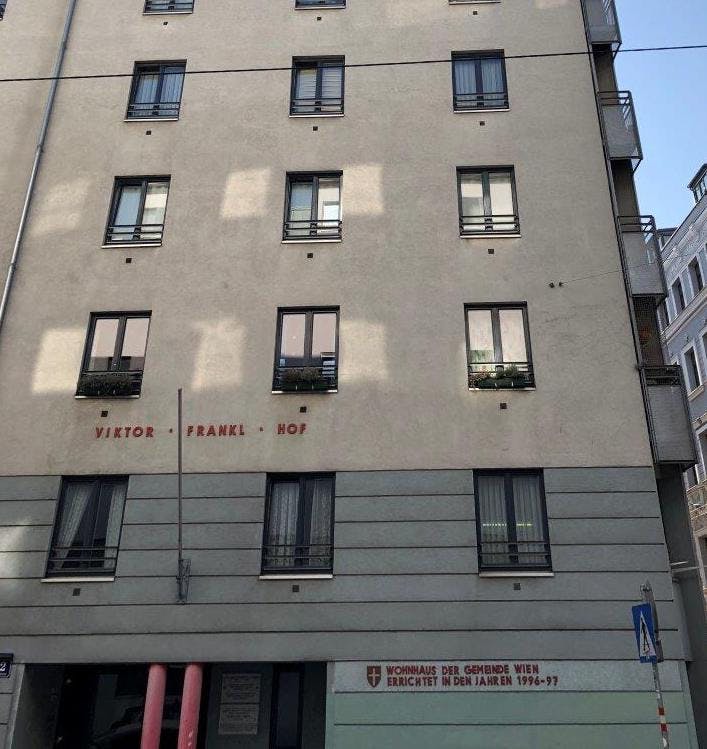 “Everything can be taken from a man but one thing: the last of the human freedoms—to choose one’s attitude in any given set of circumstances, to choose one’s own way.” ― Viktor E. Frankl, A man’s Search for Meaning.

A walk in Vienna’s second district is (whatever else it may be) a visit at the birthplace of modern psychotherapy. Freud, the founder of psychoanalysis, lived and studied here.

Wandering on Zirkusgasse, a street just like any other, one can find a memorial plaque on the house front where Viktor Frankl lived between 1905 (his birth) and 1942 (his deportation to Auschwitz).

Viktor Frankl was a Jewish psychiatrist and psychotherapist. In this house he developed his theory and method (logotherapy) which would become known as ‘the third Viennese school of psychotherapy’. The first was Freud’s and the second was Alfred Adler’s “individual psychology” (who had also lived for a time in the neighborhood).

Viktor Frankl’s theory was focused on the fact that the most fundamental human need is the need for meaning, and his meaning was to help others find meaning in their life. His theory was to be put to the harshest possible test. In 1942 he was deported to Auschwitz. He spent a total of three years in four camps.

Surviving deportation, he dictated in nine days an account of his experience, including his belief that his approach to life was what kept him alive. With this he provided a concrete example that life holds a potential meaning under any conditions, even the most miserable ones. The book (published initially anonymously in 1945) became a bestseller and is still highly bought and read today.

Viktor Frankl died in Vienna on 2 September 1997. He is considered by many as a role model and source of inspiration! We highly recommend on reading his wonderful book, which can change one’s perspective on life.

For more information on his life and theories, one can visit Viktor Frankl Museum at Mariannengasse 1/15.