The story of Sisi’s Bridge 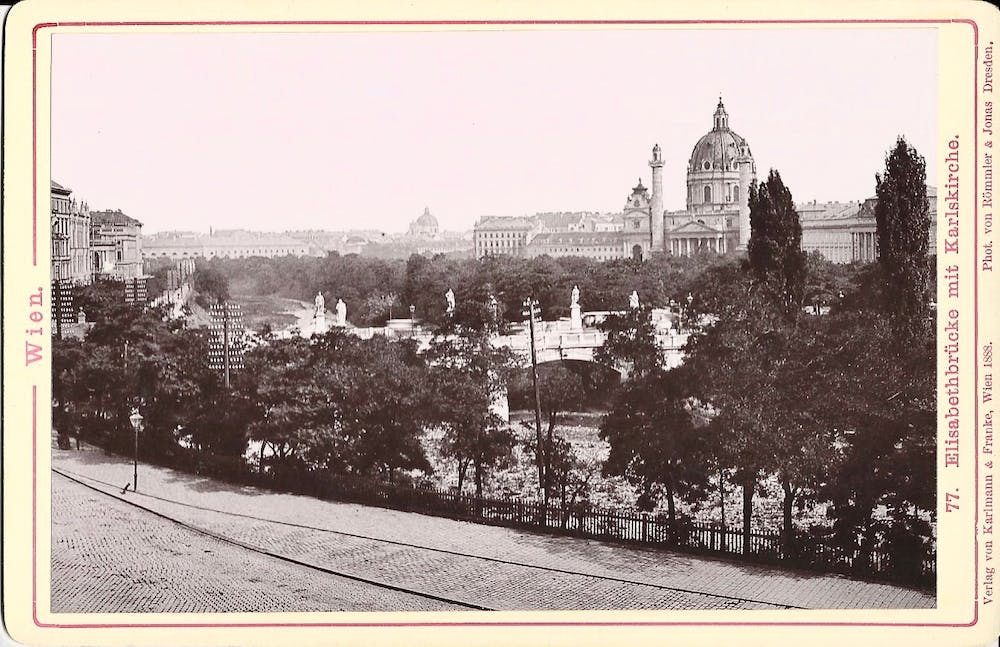 It is 20 April 1897 and you leave your flat in the Freihausviertel and go for a walk to the Karlskirche. Wanting some coffee, you head towards your favorite coffee house, the Heinrichhof Cafe. Unless you know of another secret path, chances are you will have to cross the Elisabethbrücke (“Elisabeth’s bridge”). Today is your last chance to cross it. The Elisabethbrücke crossed the Vienna river, which extends from the western part of the city starting in the Wienerwald and ends in the Danube canal.  In today’s Vienna, the river follows more or less the route of the U4 metro line only to disappear right before the Kettenbrückengasse metro station, where the famous Naschmarkt is located, and reemerge in the Stadtpark. In 1897, several bridges crossed the river and one of those was located in the area of today’s Karlsplatz.  The predecessor of the Elisabethbrücke dated back to the 15th century.  With several modifications, this bridge proved resilient and survived many of the floods that Vienna experienced during the bridge’s lifetime. Eventually a replacement was necessary leading to the removal of the bridge by 1850.  The inauguration of the new Elisabethbrücke was part of the celebrations held across the city for Franz Joseph’s nuptials. It was here on 23 April 1854 that (the then) Elisabeth of Wittelsbach – as the first pedestrian on the bridge – was officially greeted by the Mayor of Vienna on behalf of the city. The next day she was crowned Empress Elisabeth and was to become affectionately known as ‘Sisi’ by the Viennese. In 1867 the bridge was decorated with eight sculptures showing famous historical figures  such as Duke Heinrich II Jasomirgott (member of the Babenberger family) in the picture, Rüdiger Starhemberg (who led the defense of Vienna during the second Ottoman siege), and Bernhard Fischer von Erlach (architect of the Karlskirche). 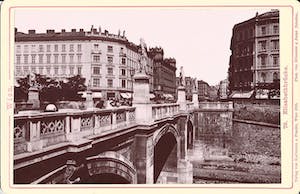 The Elisabethbrücke, however, did not even outlive its namesake. Progress demanded space and as the city grew, a city tramway was planned with its route along the trajectory of the Vienna river. This made it necessary to regulate the flow of the river and also to cover part of its path. The Elisabethbrücke was gone by April 1897.  ‘Sisi’ departed less than a year later in September 1898 at the hands of an assassin. The bridge has not been lost entirely though. The statues were deemed too valuable to discard. They temporarily inhabited the tramway station at Karlsplatz, where they were renamed the ‘chimneysweeps’ on account of the amount of soot they collected from the trains. However – being well-travelled gentlemen – they were soon on the move again and were relocated in 1902. Next time you enjoy the Christmas market or some music festival in front of Vienna’s Rathaus, look around and you will see them attesting to several turbulent periods of Vienna’s history. This time, however, they are much cleaner! (Cr.) 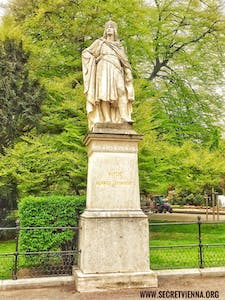